In December, I was contacted by Professor Ricardo Nemirovsky from San Diego State University to design 3D printable surfaces for the  Taping Shape* exhibit at the Rueben H. Fleet Science Center in San Diego, California. The exhibit runs from January 30 through June 12, 2016.

The exhibit contains a structure made out of packing tape with
three interconnected regions: a torus, a topological
equivalent to Schwarz P surface, and a pair-of-pants
surface with the legs twisted. The structure is large enough for visitors to walk and crawl through. There are three “work tables” (one for each region), with materials, suggested activities, poster displays, etc. The 3D printed models will be a part of the work table and displays.

In the following blog posts, I’ll explain a bit about the math behind the surfaces, and how we figured out how to build and print them.

My next project (after finally finishing all the quadratic surfaces) was to make a helicoid. I spend some time on Mathematica creating different helicoids by changing the parameters of the formula. The helicoid is pararametrized by \(x=u\cos(t), y=u\sin(t),\) and \(z=u\), where \(u\in[-1,1] \) and \(t\in[0,2\pi]\).

Professor Denne and I decided to print two of the ones I created to start (we may print more!). I exported the following Mathematica files and imported them into Cinema 4D. 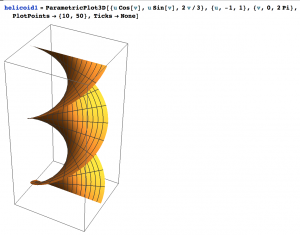 Professor Denne used these files (as well as others) to create another worksheet in Mathematica. It can be found here. 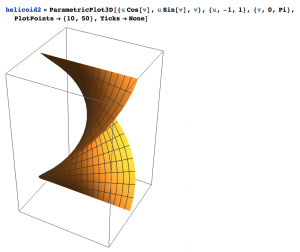 After making them the correct size I optimized the polygons and extruded them by 0.20 cm (a process I can now do very quickly after all my practice with the quadratic surfaces). I then printed each of them on the liquid printer and had fantastic results! 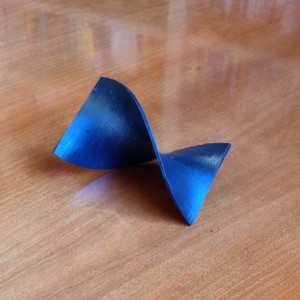 The .STL and .form files for both of these helicoids can be found on Thingiverse. 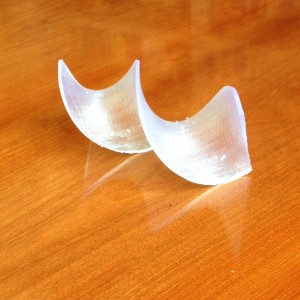 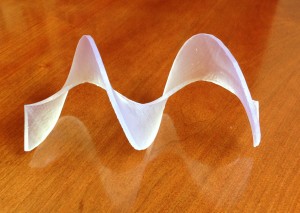 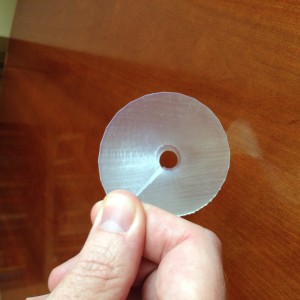