Part of the design challenge for the models for the Taping Shape* exhibit, was to find a way to join them together. I was inspired by Jason Cantarella’s Decomposition of a Cube Manipulative which uses small magnets to join the pieces together. These magnets are 3mm (diameter) x 3mm (height) cylindrical rare earth magnets.

To make holes for the magnets I made a cylinder of height 6.4mm and radius 1.6mm. I knew I needed to use the Boole tool to create the holes. Most importantly, I had to make sure to that the holes perfectly aligned on different pieces. Cinema 4D has a wonderful Array tool, which I used to create an array of four cylinders centered at the origin. I adjusted the radius of the array until the cylinders were perfectly placed on the pair-of-pants model. The 6.4mm height of the cylinders allowed me to position the models above or below the array, so the height of each hole was precisely 3.2mm.

I then moved the different models (or the array) around the origin to get four holes perfectly placed in each rim of the pair-of-pants, ring and caps models.  The photo below shows the ring system for the pair-of-pants with the cylinder array ready for the Boole tool on the left. The ring on the right is ready to go. 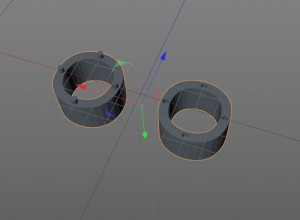 After printing, I found that the magnets fit snugly and would not come out. If you are worried about this, Jason used a little JB Weld epoxy. (He suspects that you could also use superglue.)

Putting the magnets in was nearly impossible. However Jason’s magnet insertion tools were just awesome. They allowed me to seat the magnets into the little holes, and helped me keep track of which end of the magnet went where. I strongly recommend printing the \(+\) and \(–\) magnet insertion tools in different colors to help with this. I put down one tool to check a print, then picked the other one up instead, messing up the placement of the magnets. (I discovered the hard way that the magnets really don’t come out…)

For the pair-of-pants and caps models, I alternated the \(+\) and \(–\) ends of magnets around the rims of the pair-of-pants. I did this in a consistent way, for example the \(+\) was always at the front and back of the pants.  For the rings, the plain ones should be aligned the same alternating way on the top and bottom rims. The ones with plus/minus signs or 90 degrees should have the arrangement rotated by 90 degrees. 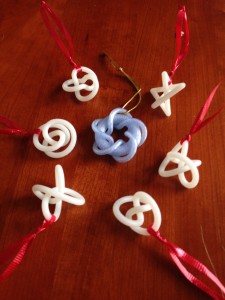 I’ve been back printing on the FormLabs 1+ liquid printer this week. I decided it was time to print out some more knots, this time for use as festive decorations. I printed out Laura Taalman’s Trefoil Managerie and used some red gift ribbon to create ornaments. Previously Laura had given me a torus with a (5,2) torus knot. I also turned this into a decoration. 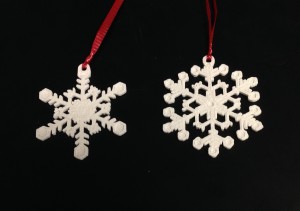 I’ve also printed more snowflakes. Again from Laura Taalmans’ Snowflake Machine, the small snowflakes that have a circle so you can hang them up. Awesome. 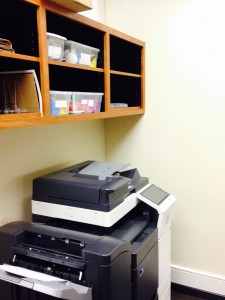 Our 3D printed math models have arrived in the W&L Mathematics Department ready for the Fall semester. They are in labeled clear plastic containers right over the biz hub in the math work room, so everyone can easily get to them.

We are looking forward to seeing what people do with them in class this coming semester. In particular, if we get any more requests for builds or rebuilds. 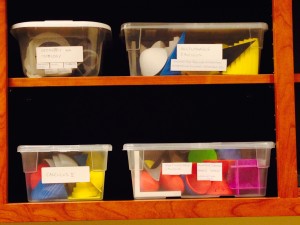 Our summer build team attended the centennial MAA MathFest Conference in Washington DC. We had a wonderful time attending many talks, the exhibits and the evening entertainment. (Some of our favorites included the talks by Erik Demaine, Noam Elkies, and the Cirque de Mathematiques.) 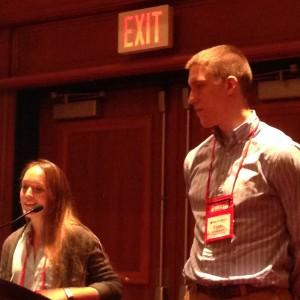 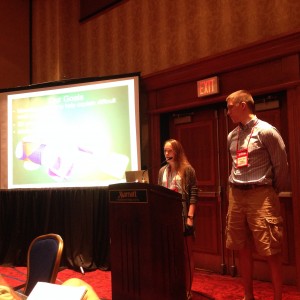 Emily and Ryan gave a wonderful (and well attended) talk about their summer work. I spoke about our work in the What Can a Mathematician Do with a 3D printer? session organized by the inspirational Laura Taalman and Ed Aboufadel (below left).  Everyone who brought printed objects got to display them at the front of the room (below right). 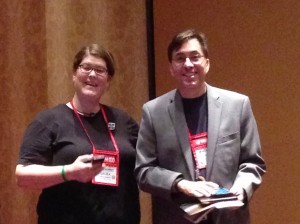 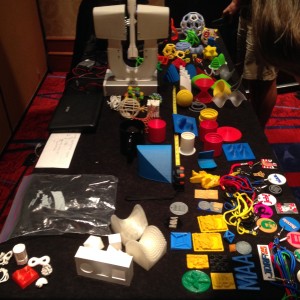 Laura had her MakerBot mini printing before the session started. A small collection of her models was placed in front of it. Our models were right in front of Jason Cantarella’s 3D printed calculus robot Cy. They were very well received by everyone present. 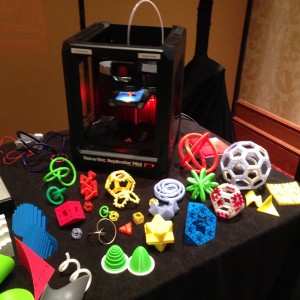 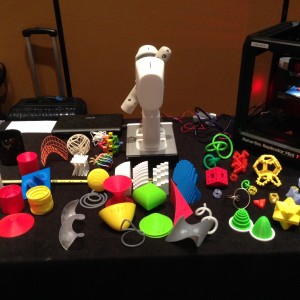 Here are some of the wonderful models by Christopher Hanusa from Queens College CUNY (left), and Lila Roberts from Clayton State University (right). 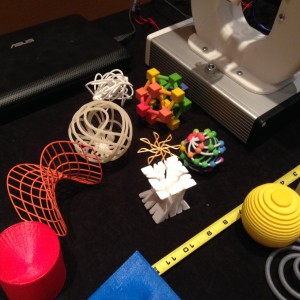 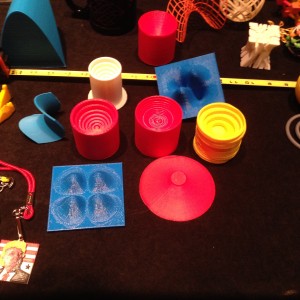 Laura spoke about how she designed and printed the Catalan Wireframe Polyhedra, shown below. We were even lucky enough to each be given one by her! I’ve come away from the session with many good ideas of using 3D printing in the classroom, as well as designing new math models. 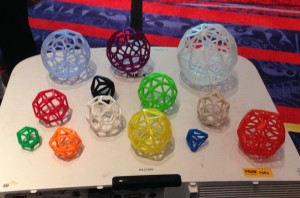 Our summer research project has officially ended. Emily and Ryan have been phenomenal. Together, we’ve designed and 3D printed over 46 math models during the past 9 weeks. Given that our first week was spent working on the math and learning computer programs, we’ve averaged a little over 6 models a week. Phew!

We also 3D printed models that other folks designed, which means we’ve well over 55 different models in total.

all currently at the 2015 MAA MathFest conference in Washington DC. Emily and Ryan will be talking about their work in a student research session, and I will be discussing our work in a session on What can a mathematician do with a 3D printer? organized by the inspirational Laura Taalman and Edward Aboufadel.

Before I left to come to MathFest, I had W&L photographer Kevin Remington take some stills of just a few of our models in a professional light box. The results are fantastic. Many of these photos appear in Thingiverse, as well as my web page.

These photos show: a few of the quadratics surfaces we designed and printed;

the strange bowl family; some of our ”sliced” volumes; and the part of a helicoid, the “Bulge Head” solid, and Voronoi Klein Bottle.

The neat thing that we’ve been doing in the past couple of weeks is to use the FormLabs Form 1+ liquid resin printer. It is just so cool! 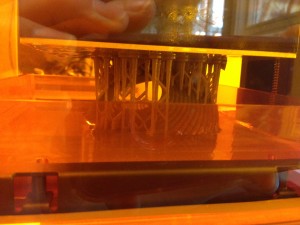 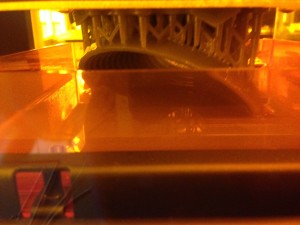 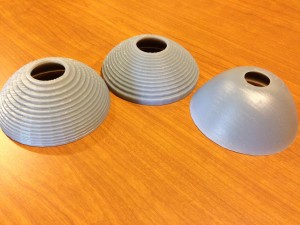 The first objects we printed were the strange bowls (shells, washers and smooth). Previously we tried to print them on the MakerBot 2X, but the sheer number of supports meant the print was not a great success. However, the FormLabs printed them beautifully. We all loved watching the bowls slowly come out of the liquid resin.

We next printed was the Bulge-Head solid. It is one of our favorites! 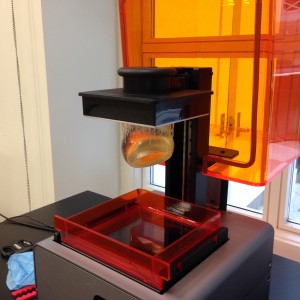 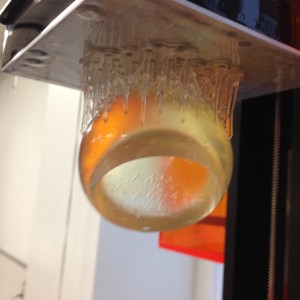 Finally, we had great success printing parametric curves and other surfaces with the liquid resin printer.

Introducing Emily Jaekle and Ryan McDonnell, two undergraduate students from Washington & Lee University who are doing research with me this summer. Expect to hear from them regularly!

It’s time to start exercising our imagination and see beyond. We live and breathe in a 3-dimensional world, and so does mathematics. This blog is my way of sharing some of the ways I’m experimenting with visualizing mathematics, whether it be from an academic or everyday perspective.

I’ve been inspired to write this blog after reading JMU Professor Laura Taalman’s blogs MakerHome and Hacktastic. Thanks Laura!