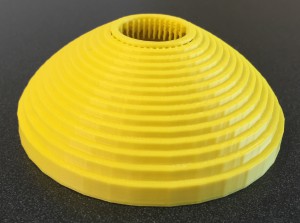 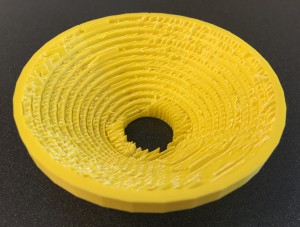 One of the issues with the print comes from the fact aht  the top shell does not connect smoothly to the shell below it.  Initially I thought that this resulted from an error in the printer.  When I looked at the Cinema 4D file, however, I discovered that the top shell does not make contact with the shell below it because its height is less than 1/16 (the bowl shape is very flat there).  Additionally, the shell second from the top does not make contact with the shell below it, but the height difference is not noticable.  Another issue with the print was that the leftover supports look bad.  The inside of the object was filled with them, and even after clearing out most of the supports, it still looks terrible.  We are thinking about printing the object on a different printer, such as the Form Labs printer (which uses stereolithography) or the ProJet 260 (which uses powder), in order to get the inside part of the object to look clean.

We decided to find a solid of revolution for which both the washer method and cylindrical shell method worked and to model it with both methods. Laura Taalman has done similar designs for shell approximations which can be found here and here.

We decided to rotated the area between \(y=x\) and \(y=x^2\) about the line \(y=1.25\). This created a bowl-like object which is curved on the outside, straight on the inside and with a hole at the bottom of the bowl. We split this project up and I created a model of the object using the washer method, while Ryan used the cylindrical shell method. We planned to each use 16 slices/shells so we could compare our two models later.

Creating this object was a very similar process to that of creating the sphere with washers. Since I was using 16 washers and the object has a height of 1, each washer was 1/16 thick. In Cinema4D I used the preprogramed tube object and made each of them to have a height of 1/16. In order to calculate the inner and outer radius of each washer I used the value of middle of each washer, 1/32, 3/32, 5/32, 7/32, etc. I plugged these values into the equation \(f(x)=1.25-x\) for the inner radius value and \(g(x)=1.24-x^2\) for the outer radius value. The only other thing I had to change for each was was its height coordinate. My washers in Cinema4D were parallel to the \(xz\)-plane so I adjusted each washer’s \(y\)-coordinate so they would be spread out to the correct height. I increased the \(y\)-coordinate of each was by 1/16 (the height of each washer) from the previous.

Since I used the preprogramed tube object I was unable to use Magic Merge easily to connect these object and instead just used the ‘Connect + Delete’ command under the ‘Mesh’ tab. This means that there are inner walls in my object, but since each washer is relatively small this is not hugely problematic and adds extra support.

I ran into one issue when I was finishing up with my object. The smallest washer (and the last one I created) did not touch the previous washer. 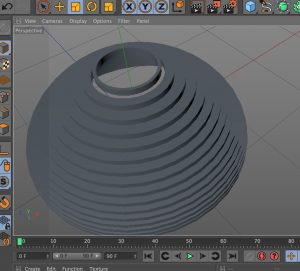 We decided to remedy this we would just delete the 16th washer and make a note of it here as well as in the description of the object on Thingiverse.

We printed Ryan’s object with cylindrical shells using the Makerbot and the supports on the inside were difficult to remove and didn’t look good. We are currently discussing printing on another printer for these objects and I will update later on how that goes!