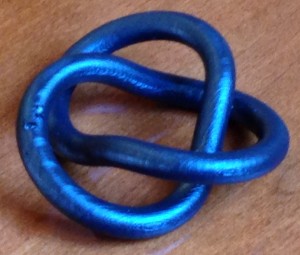 Both models were printed on the FormLabs printer. I first made a small \(T(2,3) \) knot with a label extruded out of the curve (as shown to the left). I used Cinema 4D to design the model by using the Formula Spline to draw the curve, the Sweep NURB to give the curve depth, and the Wrap Tool to wrap the text around the curve. I also used the Extrude Tool to give the equations depth and the Boole Tool to connect the equations to the curve. For both knots I had to make sure the ends of the knots overlapped correctly. Before printing the \(T(3,2)\) knot, I had to change the range of \(t\) to \(t=[0, 2\pi] \) instead of \(t=[0, 5\pi]\) (I initially used \(5\pi\) to be sure that the curve closed). 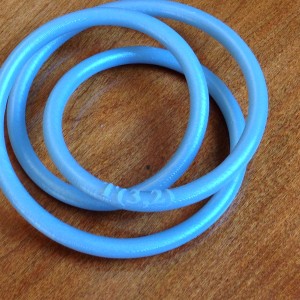 The first \(T(2,3)\) knot came out nicely, however the text was a little small. Using the subscript made the numbers too small, so I reprinted the knot used parentheses instead, as shown here. The \(T(3,2)\) knot also looked great, as it was smooth and there were merely small nubs where the supports were, which could be removed with an exacto blade. We’ve discovered that the FormLabs printer makes smoother surfaces and finer curves than does the MakerBot, which is why it is ideal for printing knots.