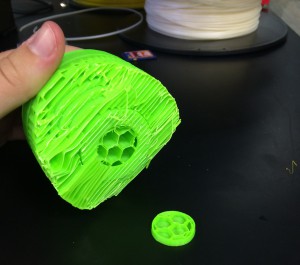 When I printed my sphere with 20 disks I oriented the object so the disks were parallel to the build bed, as I had done with the 10-disk sphere. However, when I removed the sphere from the build bed, the bottom disk popped off and remained stuck to the build bed. This was the first failure I had while printing.

In order to remedy this problem I decided to try printing the sphere with the disks perpendicular to the build bed. I hoped this would fix our problem when it came to removing the object.

We had just finished unpacking and setting up the Mathematic Department’s MakerBot Replicator 2 after it had been in storage for awhile so we and decided to test it with the rotated sphere. This proved to be problematic for many reasons. 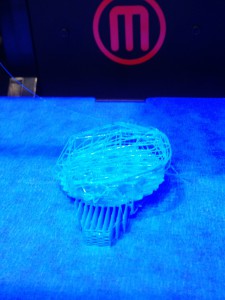 First, the nozzle of the printer became clogged, resulting in a mess of plastic as shown below. We didn’t know what the problem was at this point so we tried twice more only to result in the same mess of plastic filament. 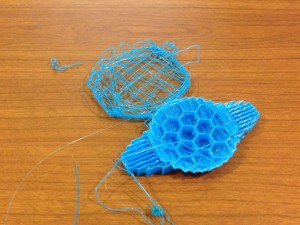 Once we figured out that was the problem and our printer needed fixing, I decided to try again on the MakerBot 2X in the IQ center. When I set up the file to print and looked at the print preview I saw it was using twice as much material and would take twice the amount of time to build this sphere even though it was the same size as the old one. Clearly my design had issues.

Looking back at my Cinema 4D file I realized that the object had walls inside of it between each disk and was not completely hollow. This meant when I printed the object with disks perpendicular to the build bed it needed much more support, and thus the extra time and material to build it. At this point I realized I needed to change the design and create a hollow object.

In order to do this the IQ center’s David Pfaff suggested I try a plugin for Cinema 4D called Magic Merge. The instructions for downloading and using Magic Merge can be found here.

Unfortunately there are some limitations to Magic Merge as I quickly found out with my object. Objects must overlap slightly in order for Magic Merge to work. Since I had created and placed my disks to be mathematically accurate, this proved to be a problem. When I tried to expand the disks into each other they expanded in both directions, making the object inaccurate. To use Magic Merge and keep my object accurate would have been very complicated and time consuming so I decided not to. However with other objects Magic Merge can be very useful.

Instead, I reprinted the original object with disks parallel to the build bed and was very careful in removing it so the bottom disk did not pop off again.