The next quadratic surface I made was a cone. This is a particularly challenging object since the cone’s two halves meet at a single point in the center. In order to deal with this printing challenge, I originally attempted to create the object and add a certain amount of thickness to the middle so it would print correctly. 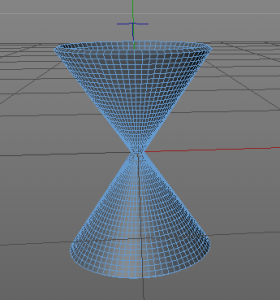 Then I optimized the object by 0.02cm. With the first cone I made I reversed the normals so they were facing outwards from the cone surface. When I extruded the surface by 0.25cm this automatically gave center of the object more thickness. Unfortunately I realized that while it gave the center thickness, it also offset the lines of the cone so they didn’t match up, which is not what we wanted. In order to fix this problem I did the same thing but did not reverse the normals (so they were facing the inside) and extruded the surface to give the cone thickness. 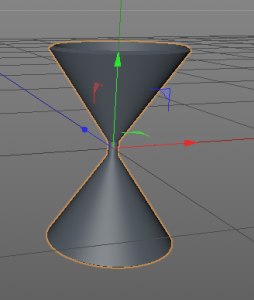 With this second cone I removed the center using the Boole Tool, and a cylinder of radius\(=0.25\)cm and height\(=2\cdot 0.25\cdot 1.5=0.75\)cm. We did this in order to preserve the lines of the cone and give it the support the object needed. After removing this cylinder from the center I then added one of the same dimensions in its place. 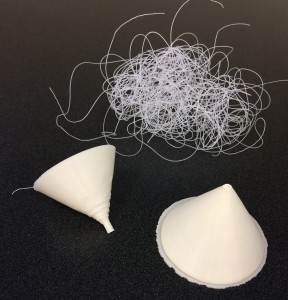 We knew this print had a high potential to fail but decided to print it as a test to see what we might need to change in our design. We left it overnight and it was a huge mess the next morning. Clearly this design didn’t work and we needed to rethink it.

I decided that creating both sides of the cone in one object was just not going to work. Instead I decided to create both halves separately and then connect them using a cylinder made from a sheet of clear overhead plastic (an idea that came from Henry Segerman’s Calculus Surfaces). 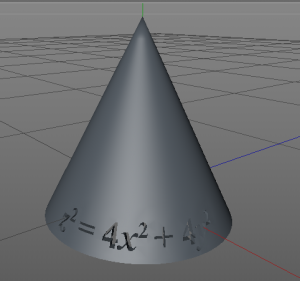 In order to do this I used the same formula spline except this time from only \(t=-2\) to \(t=0\) and copied and rotated it to create the second half. On one half I put the equation for the cone \(\frac{z^2}{4}=x^2+y^2\) and immediately ran into trouble. I had used too many subdivisions (72) and the object was not accepting the Boole with the equation. After creating many different cones with different subdivisions I found that 60 worked. Once this problem was solved I added the equations to one of the halves of my cone and printed it. When I added the equation I put it all the way through the surface and not just imprinted on it since the object had very little thickness to it. 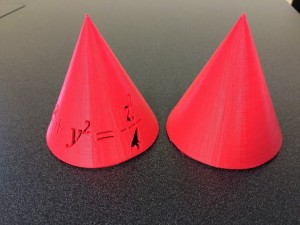 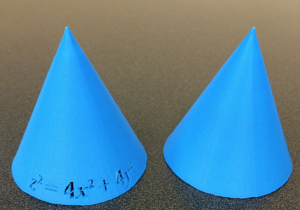 The print was successful but showed a few flaws in my design. One was the equations and how they were a little too big and how the fraction parts of it needed to be downsized to match the other parts of the equation. This was easy to fix in Adobe Illustrator by changing the font size in the fractions from 36 to 24. I also made sure the numbers in my equation were not italicized and just the variables were. The other design flaw I found was that the bottom of the cone was not completely flat and was angled from when I extruded the surface to give it thickness. To fix this I used a cylinder and “booled” the bottom of both cones to make them flat. I then reprinted my object and had great results. These objects can be found on Thingiverse here.