Ryan and I began this summer by reviewing problems from Calculus II in James Stewart’s Essential Calculus Second Edition. I started by looking at Section 7.2, Volumes by Slicing. In Section 7.2 the first method introduced is the disk method. Here a volume is approximated by very thin cylinders, which we (confusingly) call disks. There is a great picture in Example 1 of Section 7.2 showing spheres approximated as Riemann sums of disks. I decided my first project would be to make these three spheres.

I began with the sphere \(x^2+y^2=25\). This is a sphere of radius 5, centered at the origin. I assumed the units were centimeters, so the diameter of the sphere was 10cm.

To calculate the height of each cylinder used to create these disks I simply divided 10cm by the number of disks I planned on using. 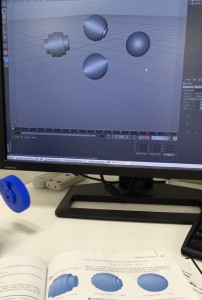 I decided to make the entire object in Cinema 4D and not use Mathematica at all. In Cinema4D, under the ‘add cube’ button I selected ‘cylinder’ to add cylinders to my working screen. To make these cylinders the correct dimensions for the disk method I used the calculations described above. I also used the same calculations and numbers to find the coordinates of each cylinder in order to line them up to create the sphere. Each cylinder’s coordinates were based on the center of the object so two of the coordinates were 0, while the third was the \(x-\)value described above. (Precisely which of the \(x,y,z\) coordinates were used depended on the orientation I chose for the cylinders).

Once I had created all the cylinders and placed them in the correct places, I needed to make the sphere into one object. To do this, I selected all of them and made them editable (into polygons). Then under the ‘Mesh’ menu at the top of the screen I selected ‘Conversion’ and ‘Connect Objects + Delete’.

The final step in Cinema 4D was to export each sphere as an .stl file. 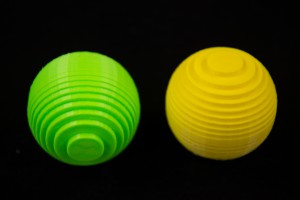 I printed the 10-disk sphere first without any issues on a MakerBot2x.

When I went to print the 20-disk sphere later on that week, the object broke when removing it from the build bed of the MakerBot2x printer I was using. In order to remedy this issue, we decided to flip the sphere so the disks would be perpendicular to the build bed. More on this later.

These objects can be found on Thingiverse: Sphere: 10 disks and Sphere: 20 disks. 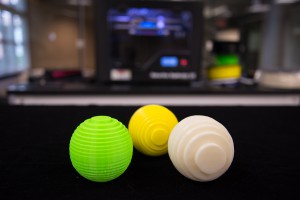 Introducing Emily Jaekle and Ryan McDonnell, two undergraduate students from Washington & Lee University who are doing research with me this summer. Expect to hear from them regularly!

It’s time to start exercising our imagination and see beyond. We live and breathe in a 3-dimensional world, and so does mathematics. This blog is my way of sharing some of the ways I’m experimenting with visualizing mathematics, whether it be from an academic or everyday perspective.

I’ve been inspired to write this blog after reading JMU Professor Laura Taalman’s blogs MakerHome and Hacktastic. Thanks Laura!