My next object was a bulge-head solid. This solid lies above the \(xy\)–plane, outside the unit sphere, and inside the cardioid of revolution given by \(\rho=1+\cos\phi\). Professor Beanland had given us these equations, since he was really curious to see what the solid looked like. He’d nicknamed it the cone-head solid, but after printing we renamed it the bulge-head solid.

Since the outside of the solid was a cardioid of revolution, I decided to create the solid in Cinema 4D by creating two splines (one for the cardioid, the other for the hemisphere) and revolving each around an appropriate axis.  Professor Denne helped me to figure out which parametric equations to place into Cinema 4D’s inputs for a formula spline. These were \(x(t)=1+2\cos(t) + \cos(2t)\), \(y(t)=2\sin(t)+\sin(2t)\), and \(z(t)=0\), where \(t=[0,\pi/2]\).  For the spline that would later become the hemisphere, I used \( x(t)=\cos(t)\), \(y(t)=\sin(t)\), and \(z(t)=0 \), where \(t=[0, \pi/2] \). I then used the Lathe Tool with an angle of \(360^\circ\) to make the two boundaries of the solid.  I then put them into a Boole to make a union between the two boundaries.  I printed the bulge-head solid on the FormLabs printer using clear resin. When loading the object into the FormLabs software, we got a warning about the object’s integrity, but we decided to continue the print anyway. Later on we were worried that the object would use up too much resin and that it may have some problems on the surface (like the smooth strange bowl did).  It turned out that added a bit more resin mid-build, just to be on the safe side.  The solid looks pretty good right now because it only has a few pimples on the inside, but no significant lumps. The object is still hardening and once it’s completely dry we’ll remove the outside supports. This will probably leave a few pimples as well.

You can find this model on Thingiverse here. 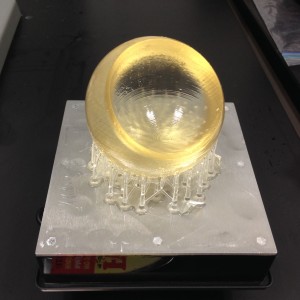 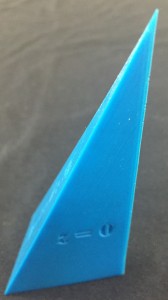 I made two tetrahedra, both of which demonstrate the strategy behind setting up triple integrals. One tetrahedron came from our calculus textbook, another came from Professor Keller. The former is defined by the equations \(x + 2y + z – 2, x = 2y, z = 0\), and \(x = 0\) (Exa 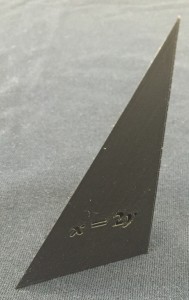 mple 5 of 12.5 in Stewart’s Essential Calculus), and the latter by \(y=-6, z=0, z=x+4\), and \(2x+y+z=4\). When I first tried to print the Tetrahedron from the textbook, the equation on the bottom face did not appear. Later, Dave Pfaff told us that it was because the object was inside out in Cinema 4D. I fixed the issue by reversing the normals on the object.

I then tried to print the object in addition to a set of round coordinate axes, but one of the axes was either knocked out of position by the left extruder (the unused one) or it curled up because it cooled (or maybe both). Later, I tried to print the tetrahedron with Prof Keller’s tetrahedron, but they curled up at the ends because the cooling of the plastic is exacerbated when the length 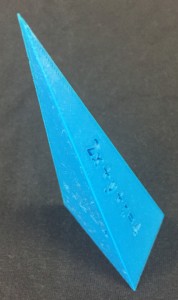 increases. Next, I used a raft to print the two shapes, but the equations looked awful. So then I used some ABS juice on the half of the build-plate that contained the sharp vertex of Professor Keller’s tetrahedron and the print came out well, except for a messy-looking number “4” and some stringy filament on one of the faces (see blue shape).

Finally, I printed Professor Denne’s tetrahedron along with another set of coordinate axes (see black objects). Since there was some juice left over on the build-plate, the only end that curled up was at the origin of the coordinate axes, and the rest of the objects looked great.  These tetrahedra can be found on Thingiverse here and here. 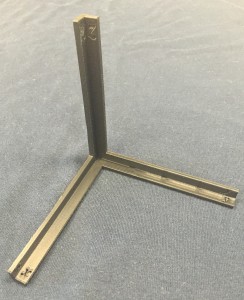