I’ve recently been going back to the 3D printed models my students designed in my Math 341 Introduction to Topology class in Fall 2014. I know so much more now than I did then when I first started on this journey. So, I decided to go back to the designs, check over them, edit them (as necessary), then reprint them and publish them on Thingiverse.

The first two models I looked at where Candace Bethea’s (’15) \(6_2\) knot and Hayley Archer-McClelland’s (’15) three interlocking trefoils. In a previous class using 3D printing, Professor Aaron Abrams contacted the developer of the program Seifert View, and arranged for the computed curves and surfaces to be able to be exported as a file. (This free software normally doesn’t allow you to do this.) We have since found this to be an invaluable tool for 3D printing knots and knots with Seifert surfaces. 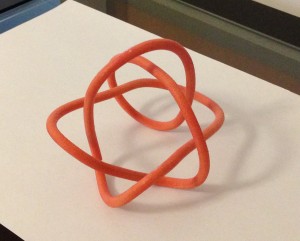 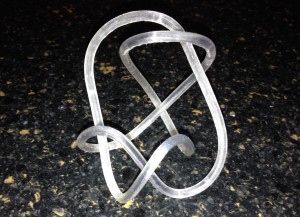 The \(6_2\) knot was first adjusted in, then exported from SeifertView, and then opened in Cinema4D. The surface of the knot needed fixing due to overlapping polygons. This was fixed by deleting overlapping polygons, then filling in the gaps using the Stitch and Sew tool in Edge mode. The knot was originally printed in orange on the Projet-260 3D Systems printer. Later, I printed it on the FormLabs 1+ printer in clear resin. You can find the model here on Thingiverse. 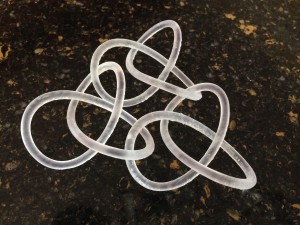 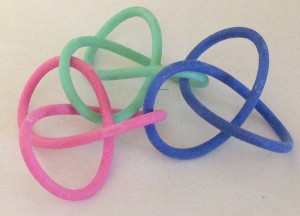 The three interlocking trefoils were designed entirely in Cinema4D. The parametric equations of a trefoil knot are \(x(t)= (2+\cos(3t))\cos(2t), y=(2+\cos(3t))\sin(2t), z=-\sin(3t)\) for \(t\in[-\pi, \pi]\). We first made the curve with the Formula tool for \( t\in[-3.14, 3.14]\). We added a SweepNurb (with no caps) consisting of a circle with radius 0.2 cm around the curve. The choice of \(t\) meant there was a small gap between the ends of the tube. We again sealed this gap using the Stitch and Sew tool in Edge mode. The knots were originally printed in pink, pale green and blue on the Projet-260 3D Systems printer. Later, I printed it on the FormLabs 1+ printer in clear resin. You can find the model here on Thingiverse. 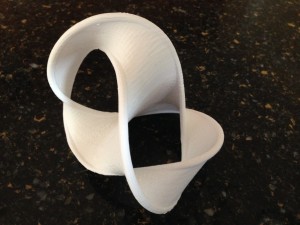 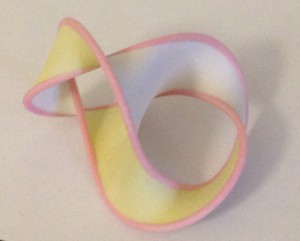 Mithra Muthukrishnan (’16) used Seifert View to design a figure-8 knot and its Seifert surface. After tweaking in Seifert View, she exported the surface to Cinema4D. It ended up being a complex design process, since we wanted to color the knot and two sides of the surface with different colors. There, the surface was extruded in both directions creating the two sides of the Seifert surface. Finally, three copies of the surface were made. In one, all the surfaces were deleted leaving the knot. In another the knot and one side of the extrusion was deleted. In the final copy, the knot and the other side of the extrusion was deleted. This left three pieces which could each be given their own color before printing. The knot was colored red/pink, the different sides of the Seifert surface were colored white and yellow. The model was originally printed in color on the Projet-260 3D Systems printer. Later, I printed it on the MakerBot 2x printer in bright white. You can find the model here on Thingiverse. 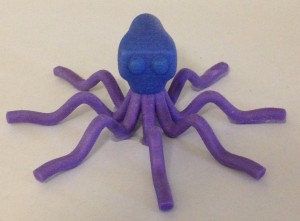 The octopus model was designed by DanJoesph Quijada (’15) entirely in Cinema4D. The legs were made using parametric equations like \(x(t) = a\sqrt{2}t, y(t)=0, z(t) = b^2 cos^2(ct)e^{-dt^2}\) for various constants \(a, b, c,\) and \(d\), and bounded time \(t\). These curves were then thickened using a SweepNurbs. To make the octopus head, we first made a box, then extruded parts of the sides to alter the shape, then applied the Subdivision Surface tool to it. Finally we made minor adjustments, such as adding the eyes and changing the dimensions of the octopus to make it look more realistic. The model was originally printed in pink on the Projet-260 3D Systems printer. Later, I printed it on the MakerBot 2x printer in bright white, though I had some trouble with the legs. You can find the model here on Thingiverse.

In Fall of 2014 I taught Math 341 Introduction to Topology. As part of the class I had the students design and then print a topological object. For most students, this ended up being the highlight of the course. 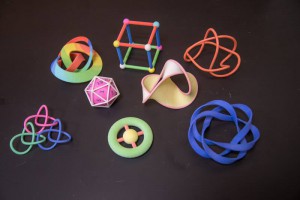 We spent a week of class in the IQ center under the guidance of David Pfaff. He showed us how objects can be viewed in the stereo 3D lab and gave us a crash course in Cinema 4D. Students then let loose their imaginations and creativity. Many students chose to learn about knots and links, ribbon knots, and Seifert surfaces of knots and links. They produced some wonderful models. Other students chose to create objects with symmetry (like the 20 sided die), or the cube-like Cayley graph. 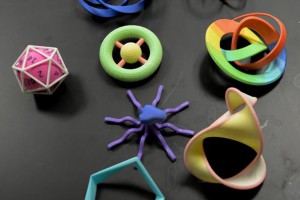 It turned out that getting the objects that could be 3d printed was hard work! Many objects had not been optimally made (for example with normal vectors pointing inwards). We were fortunate to have David Pfaff’s expertise in sorting out these errors. Eventually all the objects were printed using the IQ center’s ProJet 260. Some of them needed to be printed twice, as they broke when being removed from the printer. Many 3d printed math objects from this class and from Aaron Abrams first year seminar currently reside in the Mathematics Department.