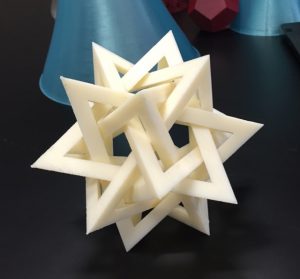 One of my favorite mathematical models is the Five Intersecting Tetrhadra model. I first became aware of this model from Thomas Hull, a mathematician at Western New England University. He has written extensively about mathematics and origami (check out his book Project Origami). In particular he has written fantastic instructions for creating this model using modular origami. 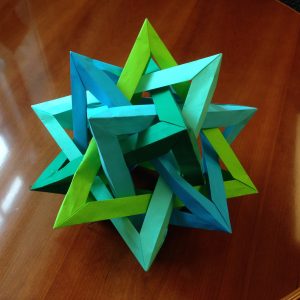 The origami version comes about by making a thin frame for each tetrahedron. Provided the frames are thin enough, they won’t intersect each other. Instead they will form a marvelous interwoven pattern. As shown on the left, I have successfully followed Tom’s instructions for making the origami version of this model.

The next natural question is whether or not the model can be 3D-printed. The answer, is of course, yes! 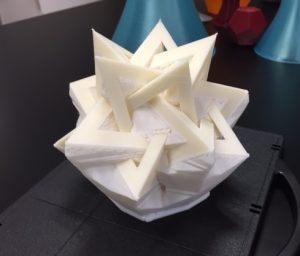 I used crsfdr’s model Interlocking Pyramids  from Thingiverse to print the model on the UPrint SE printer at W&L.  The photo at the top shows the finished version. The one to the right shows the model just out of the printer before the supports have been removed. Since the supports are made of a material that dissolves, the UPrint was the perfect printer for the job.

My colleague Professor Michael Bush has used the Five Intersecting Tetrahedra model when teaching introductory Group Theory to undergraduate students. Indeed, this was the motivation for 3D-printing the model as the origami version is not really robust enough to use in a classroom setting. The model is a great tool for discussing the rotational symmetries of the dodecahedron (or its dual the icosahedron). Roughly speaking, the rotational symmetries of the dodecahedron act in a natural way on the five tetrahedra giving a permutation representation of the symmetry group. After some noodling around this allows one to see that this group is the alternating group \(A_5\). (Michael usually suppresses details about the faithfulness of the representation at this level.)