I have modeled the the solid from Example 8 of Section 12.1 from Stewart’s Essential Calculus.  It is bounded by the surfaces \(z=\sin x \cos y\), \(z=0\), \(y=0\), and \(x=\pi/2\). The example demonstrates the strategy behind computing a double integral using Fubini’s Theorem.  I approximated the solid by eight slices in the \(x\) and \(y\) directions. In order to draw the correct splines in Cinema 4D, I had to use the correct parametric equations to plug int 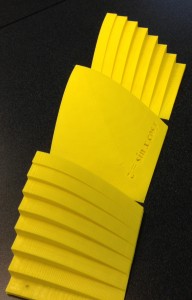 I then repeated the entire process, but this time with a constant \(y\)-variable.  I also printed the smoo 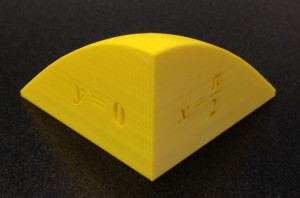 th solid, which is the volume that is approximated by the slices.  In order to do this, I imported the solid from Mathematica and put equations on it like I have in other models. These models can be found on Thingiverse here, here, and here.