The challenge: to construct a 3D printed Schwarz P surface piece for the Taping Shape*  exhibit at the Rueben H. Fleet Science Center, which could be joined to others to create a finite part of a Schwarz P surface. I’m not the first to do this,  Ken Brakke has already used his Surface Evolver program to create a beautiful and truly superior Schwarz P surface found on Shapeways.

With limited time before the exhibit, could we create a reasonable approximation of the Schwarz P surface using Cinema4D? 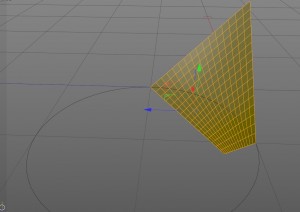 We (Dave Pfaff and I) started by finding the minimal surface for a 4-gon with corners at the vertices of a regular octahedron. We then extended the resulting surface by 180 degree rotations about the straight boundary lines. This created a surface, but it was not quite right.  We needed to cheat a bit and make the 4-gon surface closer to a quarter circle in the middle. (The actual Schwarz P surface is not circular there, but is close.) 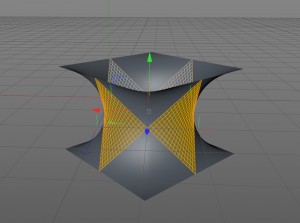 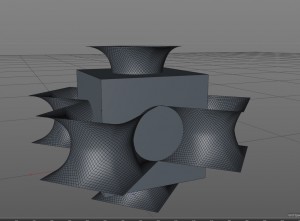 We then arranged 6 of these units in space, and added in a cube. We used the Boole command to cut out a cubical Schwarz P unit. I then extruded the surface, and added magnet holes as described previously in this post: 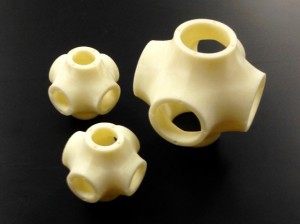 I made two sizes of models: 6cmx6cmx6cm and 10cmx10cmx10cm. We printed the models on the uPrint SE printer. They printed just wonderfully. The one small flaw in the design is that there is a slightly raised line in the place where we moved vertices to the circular arc. However, the model has many strengths: aside from the line it is quite smooth, and you can almost (but not quite) see the 4-gons. Given the time restriction before the exhibition, we decided to leave the model as is. 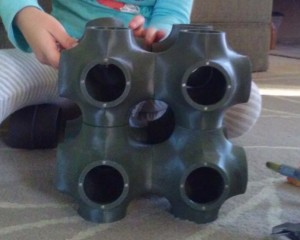 To the left is some of the Schwarz P surface models printed for the Taping Shape exhibit.

You can find the files for the model, and instructions on how to place the magnets, here on Thingiverse.