Minimal surfaces have been studied for over 200 years.  The research began when Joseph-Louis Lagrange asked a very simple question around 1760: “What does a surface bounded by a given curve look like, when it has smallest surface area?” This was a hard problem to study — roughly speaking, the mathematics of minimizing surface area leads to a partial differential equation of  the surface. The tools to study such equations had not yet been developed. In fact, the first mathematical conjectures about minimal surfaces were made from the careful observations of soap film by the physicist Joseph Plateau (published in 1873). Over the years many aspects of the problem have been solved, and most recently progress has been made using the tools of geometric measure theory.

When looking at at surface with minimal area, it turns out that smaller pieces of it must also have minimal area with respect to their boundaries. This means they must locally look like a saddle, not a hill nor a bowl (since we could reduce the area by chopping off the hill or filling in the bowl). Just like a saddle surface, minimal surfaces look the same from both of their sides. This makes sense when we consider soap films: the surface tension of a soap film is in equilibrium at every point, the forces pulling to one side must balance the forces which pull to the other side. 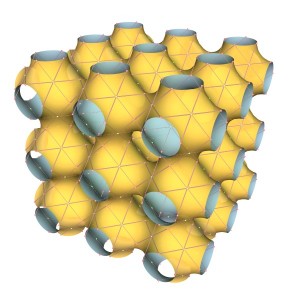 So what does the Schwarz P surface look like? Imagine two interconnected thickened cubic lattices. The Schwarz P surface lies on the intersection of these thickened lattices. In the picture to the left, one lattice lies inside the yellow surface, the other in the spaces between it. (Thanks to the minimal surface archive at Indiana University for these pictures.) 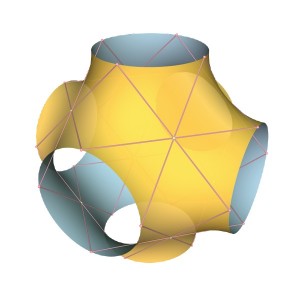 It’s a tricky surface to visualize. Another way to see it is to first find the minimal surface for a 4-gon with corners at the vertices of a regular octahedron. Then extend this surface, by rotating copies of it by 180 degrees about the boundary lines. In the figure on the left you can see one such 4-gon in the center top. Imagine rotating it about one of the edges. Keep going. You can see parts of 6 copies of the 4-gon about the vertex in the figure. Now keep repeating this process. Eventually you get to the triply periodic surface shown above.