My next successful quadratic surface was an ellipsoid. This surface I simply imported from Mathematica and then added equations to it, using the same process as described in my post on the hyperboloid of one sheet.

The first ellipsoid I made in was \(\frac{x^2}{16}+\frac{y^2}{25}+\frac{z^2}{4}=1\). When I put my .STL file into the MakerBot Desktop program I noticed that the program created supported that went up to the equation because it was on a curved surface and cut into the object. I decided to print the object with these supports and the equation on the side of ellipse and no raft. 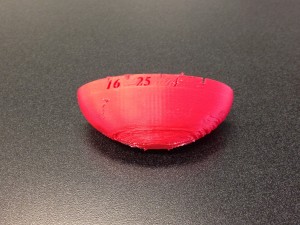 The first print I did of the ellipsoid I cancelled the print early on so that I could inspect the sides. The surface looked a bit melty, where the filament had shrunk. We decided this was fine and to try to print it again. The second time I printed this object at about half way through the print it fell over and we found it covered in a stringy mess of filament.

Taking this failure and the 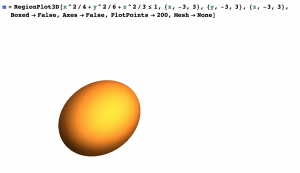 melty-ness of the ellipsoid, we decided to create a new ellipsoid that was a little rounder. I followed the same process as for the first ellipsoid using the equation \(\frac{x^2}{4}+\frac{y^2}{6}+\frac{z^2}{3}=1\) 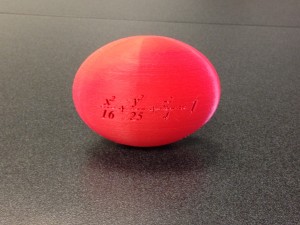 This time when I printed it I decided to put the equations on the top of the ellipse and use a raft. It printed perfectly. 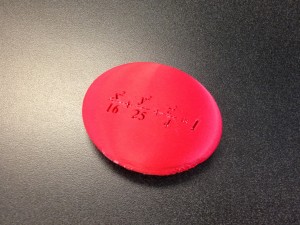 After my success with my second ellipsoid I decided to try to print my first ellipsoid again and this time with a raft. The object never fell over and printed perfectly. These ellipsoids can be found on Thingiverse here and here.