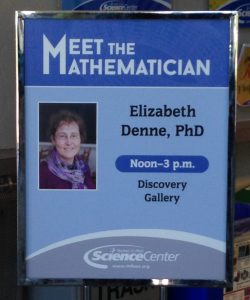 Recently, I had a wonderful two days visiting Ricardo Nemirovsky and his team in San Diego. I started by visiting the wonderful Fleet Science Center and being the mathematician for their Meet the Mathematician event on the Sunday afternoon. (I even got my own poster – wow!) Ashanti Davis met me and showed me around the Taping Shape* exhibit for which I had designed the 3D-printed mathematical models. 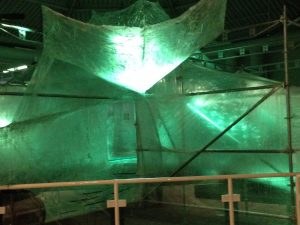 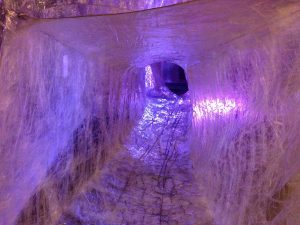 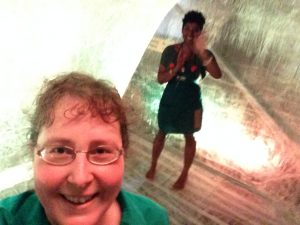 These photos don’t really capture how marvelous it was to walk inside the topological shapes. How often does a mathematician get to explore the interior of a torus, or walk down the leg of a pair of pants?!? The lighting kept changing color as well, adding to the experience.

I was able to see my 3D-printed models in action; anything from little kids throwing them around, to big kids and grandparents building more complex topological shapes. 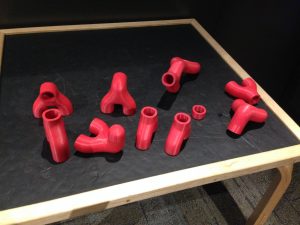 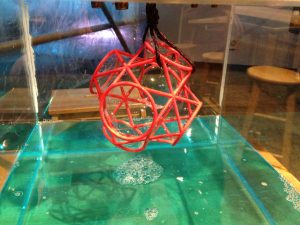 I spent my hours in the museum talking with people who stopped by about the math of the Taping Shape exhibit and of the 3D printed models. Using zome tools and another tank of soapy water, I was able to demonstrate just a few of the many different shapes that soap film (a.k.a. minimal surfaces) take. The kids experimented with their own zome tool shapes. They created some bizarre models giving interesting soap films. Many of the soap films we created showed the classic angles where three or more soap films joined together. (Math in action really does work!) It was a wet and fun time, and my hands ended up very, very clean. Thanks go to Ashanti for setting things up and keeping me company during much of the afternoon. 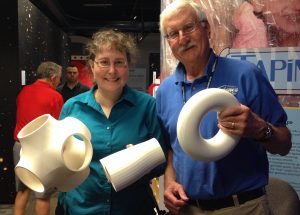 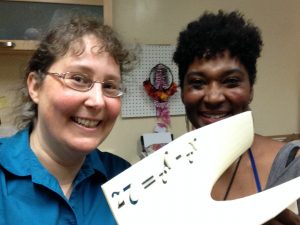 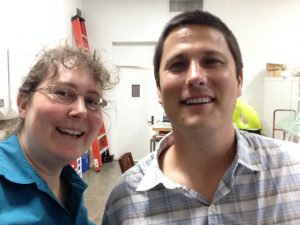 A number of my designs had been 3D-printed into giant sized models, which was great to see. On the final day of my visit I was able to meet with the entire Informath team. I was also able to hang out with Bohdan Rhodehamel and see his lab. He was responsible for 3D-printing and then assembling the models for the Taping Shape exhibit. I wrapped up my trip by giving the math department’s colloquium on Mathematics and 3D Printing at San Diego State University.