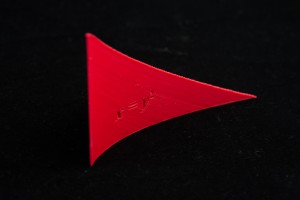 Next, I made a model of the volume from Exercise 31 in Section 12.5 of Stewart’s Essential Calculus, which is a wedge with a parabolic cylinder cut out of it.  The wedge is enclosed by the surfaces \(x=0, z=0, z=1-y\), and \(x=y^2\). First I made the solid in Mathematica from the following code (from Professor Keller and Professor Denne):

Then I exported it into Cinema 4D by typing the following:

Then I opened the resultant .wrl file in Cinema 4D. The \(x=0\) is tangential to the curved face, so it would not print unless you cut about a half centimeter off of the tangential surface near the \(z\)-axis (I used a Boolean with the solid and a cube to do this). 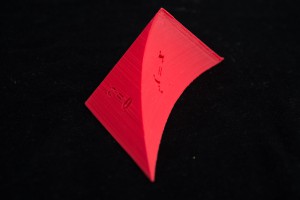 Additionally, I made equations in Adobe Illustrator (I used Times New Roman 36 Bold Italic font). I then extruded them in Cinema 4D to create 3-dimensional letters, and then imprinted them into the four faces of the object. For further instructions, visit http://home.wlu.edu/~dennee/math_vis.html.

The model looked reasonably good after being printed. The bottom face came out nicely. Near the \(z\)-axis, the solid curled up. Also, the upper edge of the \(x=y^2\) face was a bit jagged, but that can be fixed by changing the Mathematica code (increasing the number of PlotPoints). Additionally, the top vertex of the solid is quite messy, which could be fixed by printing the figure on the slanted face (\(y+z=1\)). Also, Professor Finch suggested that the object could be made a bit larger. A description of improvements to the design and what happened in the second print follows soon. You can find the updated solid on Thingiverse here. 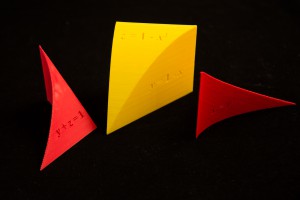