Constructing a pair-of-pants surface was easy and difficult all at once. I used Cinema 4D to create the surface. I did this by using the Subdivision Surface tool on a cube which I had extensively edited. The photos below show the image before and after I applied the tool. 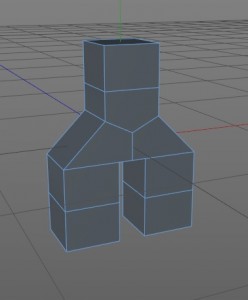 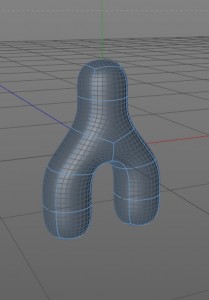 It took a long time to get the cube just right. I took a rectangular prism, then used the Knife tool to slice the top and bottom faces of the cubes. From there, I extruded both the top and the legs. To get the right shape around the middle, I used the Knife tool and the Close Polygon tool extensively. It was quite tricky to find the right shape for the legs, hip and waist of the pants. Roughly speaking, the Subdivision Tool takes midpoints of edges and faces, then moves these to a carefully defined weighted average. There is a nice Numberphile movie where the folks at Pixar explain this here. 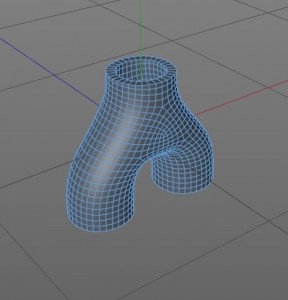 The next step was to use the Boole Tool with cubes (in a number of different ways) to cut out the pair-of-pants in the middle, and the rounded caps at the ends. I then selected the entire pair-of-pants surface, and used the Extrude Tool with caps to thicken it by 5mm on the inside. I finished the pants by Optimizing (to make sure all the overlapping vertices were taken care of), and by making sure all the normal vectors were pointing outwards (so the surface would print). I repeated these steps for the rounded caps as well. The final objects looked great and printed easily on the MakerBot 2X printer with supports but no raft. You can see small holes for magnets in the rims of the pants. I’ll explain how (and why) I added these in the next post. 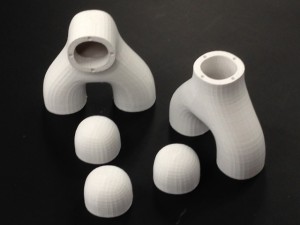 Once I had the regular pair-of-pants figured out, I made a “bent” pair-of-pants as well. I simply took the edited cube used to make it, then edited it some more. 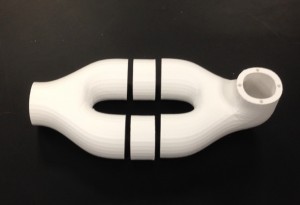 I shortened the “waist” area of the pants, and lengthened the “torso” area, before extruding outwards. The dimensions of the “bent torso” square matched those of the squares for the legs. This ensured that the “bent waist” circle would match those of the legs. I also used the Knife and Close Polygon tools to make the bend at the waist less extreme. I then extruded, optimized and checked the normals of the surfaces as before. 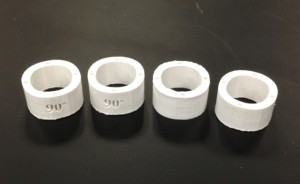 Finally, I made a ring system for the models. This was easy to do — I simply took the regular pair-of-pants cube and extruded the legs out some more. Once I applied the Subdivision Surface tool to it, I got a pair-of-pants with extra long legs. I again used the Boole Tool with cubes, to get two rings. These were extruded and finished as before.