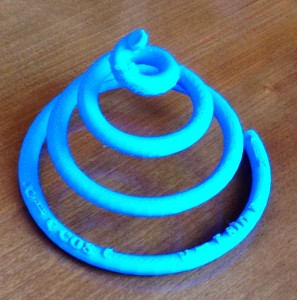 I then made a series of models of parametric curves. The first was a model of a spiral that increases in diameter as it travels along the \(z\)-axis.  The curve comes from Section 10.7 in Stewart’s Essential Calculus.  The curve is defined by the equations \(x=t*\cos(t), y=t*\sin(t)\), and \(z=t\).  I designed the model in Cinema 4D using the Formula Spline to draw the curve, the Sweep NURB to give the curve depth, and the Wrap Tool to wrap the text around the curve.  I also used the Extrude Tool to give the equations depth and the Boole tool to connect them with the curve.  The prin 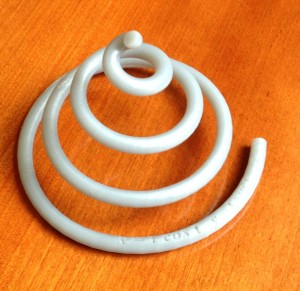 t failed a few of times due to a tangled filament and a jammed extruder, but it worked after the fourth try.  The result was that the equations looked messy and the letter \(t\) is hard to make out in places.  Also, the MakerBot did not include supports for the last rotation, which caused the print to be messy towards the vertex of the spiral.  We remedied these issues by printing another version of the spiral on the Formlabs printer, where we imprinted the equations into the object.  The print came out much better as the equations were neater as was the end of the spiral. This model can be found on Thingiverse.

I used the FormLabs printer to create a model of a space curve from Stewart’s Essential Calculus (Section 10.7, exercise 18).  The first challenge was to draw the object in Cinema 4D without a self-intersection (3D printers do not accept intersecting geometry).  Professor Denne suggested that I make two half-curves that intersect, then make a Boolean out of them.  The suggestion worked, so I was then able to put text onto it.  It was tricky to figure ou 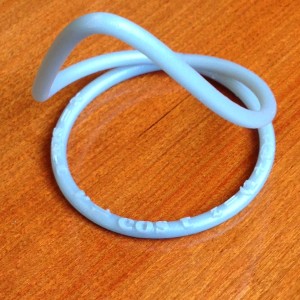 t how to get the equations onto the curve, but I decided to put them on top of the lower ring of the model.  They turned out well, as did the curve, which was very smooth and with minimal deformation due to its supports. You can find this model on Thingiverse here. 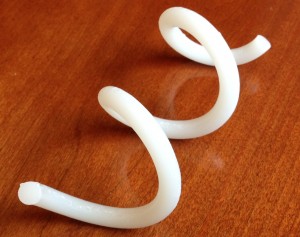 My next print was of a helix on the Formlabs printer.  I first printed a Black one with a radius of 2 mm, but it turned out to be very small and frail, and the equations were hardly legible.  I then fixed these issues by making the radius 4 mm, but the equations are again hard to read because of the white resin. This model can be found on Thingiverse here.

Our experience has taught us that equations are easiest to read on the FormLabs prints in grey. You can find instructions on how to use Cinema 4D to add equations to parametrized curves here.